It starts as a mewling sound, then rapidly builds to a wail. I cock my ear dramatically to the side and roll my eyes, listening, but no-one is there to witness my theatrics.

The memo must have gone out that I am sitting at the table with a cup of coffee.

As I return to a somewhat upright position and pick up my cup, the wail cranks into a full-blown panicked shriek and I am instantly on my feet, startled as I realise the sound is coming from sensible Mr 5. I start running toward the source and hear the words no mother EVER wants to hear:

“THE BABY IS EATING POOOOOOO!” (followed by some weak-stomached retching noises).

Thomas reaches the doorway at the same time as I do, but from the opposite direction and we pause, blank-faced, staring at each other for a mere second, both bracing ourselves for the horror we are about to witness. And it is a horror, make no mistake about it.

The baby, attired only in a singlet due to the heat, is sitting on the concrete patio just outside the french doors, eating the products of his bottom. He’s a baby; this is no sneaky around-the-corner nibbling we’re talking about but instead, a big squishy handful being messily eaten as only a baby can do.

With delight he spies us and gives us a great big  smile and proceeds to rub his hands in his golden hair and all down the front of his face.

I am a little embarrassed to admit it, but for the moment we are all frozen, staring in complete and utter horror at this previously delicious child, eating his own waste. Frozen, that is, until he decides he wants to come in and see us.

“GET OUT!!!” I shout crazily, “DON’T YOU COME IN HERE!!”  and he bursts into tears; I have never spoken to him like this before and instantly I am ashamed, I start running to him… then jog… then more of a jogging-on-the-spot…. I just can’t make myself feel bad enough to actually pick him up.

We get our act together though, and the necessary bathing of the stenchy baby takes place. The little poo-goblin has recovered his composure and is once again delighted with the sequence of events, trying to chew the sullied  face cloth as I scrub him back to his sweet-smelling best, teeth included.

Finally, the drama subsides. It is quiet again.

Apart from the small voice of Mr 5 behind me…

“Mum? Umm… what do you think that actually tasted like….?”

10 thoughts on “In which the baby samples a stool” 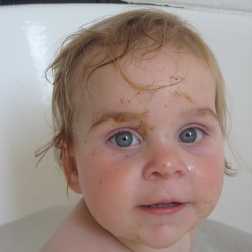 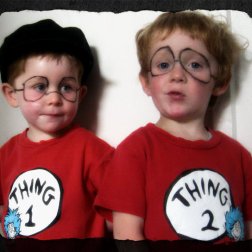 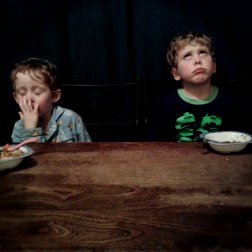